McManus and Walsh combine for another Fairyhouse winner with Janidil 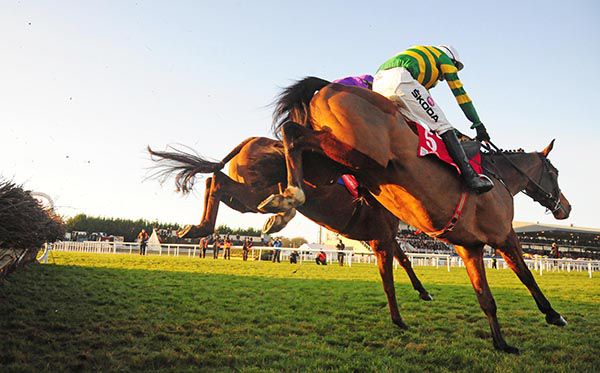 Janidil (Mark Walsh, winner, nearside) battles it out with Buildmeupbuttercup (Paul Townend, mainly hidden)
©© Photo Healy Racing
There was a third J P McManus winner on the day, and a second for Mark Walsh as Janidil justified 3/1 favouritism in the Grade A Download The App BARONERACING.COM Handicap Hurdle.

McManus and Walsh had teamed up earlier to win the Drinmore with the Joseph O’Brien-trained Fakir D’Oudairies.

Buildmeupbuttercup couldn’t match Janidil in the jumping stakes and two and a quarter lengths separated them at the line.

“It was a great run for a novice and he’s improving all the time. I hope there is more improvement in him, and the second mare ran a great race. She just has to brush up on her jumping," said Mullins.

“We’ll look forward to Christmas with all of them. He could go into Graded company although I don’t think I would like to be taking on Envoi Allen just yet!

Owing to the low trajectory of the Sun, the Stewards granted permission for hurdle number 5 to be omitted from this race. 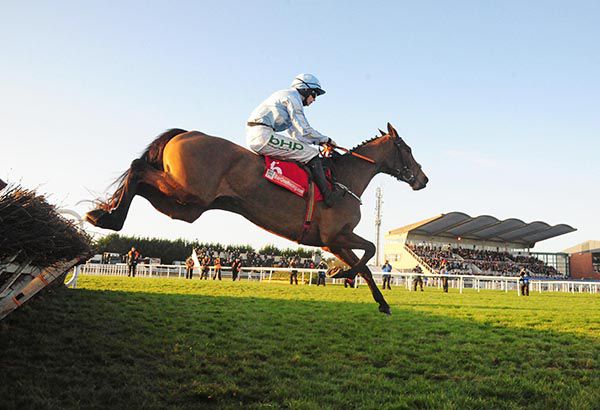 Honeysuckle devastating in the Hatton’s Grace

The money was down in a big way on Honeysuckle (9/10 from 5/4 on track and much bigger earlier) and she delivered in style in the Grade 1 BARONERACING.COM Hatton's Grace Hurdle at Fairyhouse.