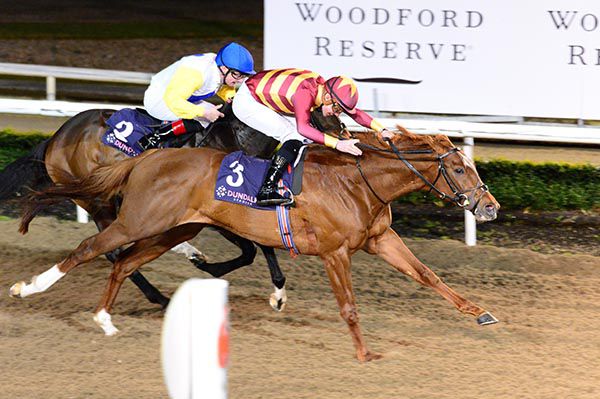 One of the premier feature events of the racing season at Dundalk, and an important stakes stepping-stone on the European road to the 147th Kentucky Derby, the Hollywoodbets Patton Stakes boasts a high class roll of honour, with the 2021 renewal promising a contest befitting the burgeoning association between Hollywoodbets and Irish horseracing.

History shows that Champion trainer Aidan O'Brien has won the Hollywoodbets Patton Stakes ten times in the last seventeen years, while his son Joseph got on the scoreboard as a trainer for the first time in 2020 with subsequent Gr3 winner, Crossfirehurricane.

In 2018, Breeders Cup Juvenile winner Mendelssohn won the prestigious feature, en route to his victory in the UAE Derby.

Every supporting race on the Dundalk Stadium 5 March programme will also be sponsored by Hollywoodbets, a brand synonymous with winners in horseracing and sports betting in South Africa for over twenty years.

The Hollywoodbets Brand has extended its international footprint in recent years, and the striking purple and yellow branding is at play in various sports in the UK and Ireland.

The sponsorship of Dundalk and the race meeting on 5 March, provides Hollywoodbets with an important opportunity to support horse racing in a jurisdiction where it conducts its business.

A feature of the Dundalk Patton Stakes raceday will be the Hollywoodbets Punters’ Challenge, a free-to-enter tipping competition which affords the public an opportunity to test their tipping talents with a €500 prize pot to be shared by the top fifteen finishers on the log. This is a free to enter challenge and an active Hollywoodbets account is the only requirement for entry.

Players in this test of racing skill may keep their prize or take the opportunity to donate their winnings to the nominated beneficiary, the Irish Horse Welfare Trust. To date, an amount of €3195 has been raised for that worthy organisation. For Patton Stakes day, a pledge has been made by the sponsors to double the player’s donation to the Irish Horse Welfare Trust entry! Details of the popular competition can be found at http://punters.hollywoodbets.com

The strong late market move was for favourite Belmont Avenue and he delivered in the Irish Stallion Farms EBF Maiden at Dundalk.

Heavy on numbers Approach pays off for Hilltop Racing

James McAuley’s Hilltop Racing fielded five for the HOLLYWOODBETS HORSE RACING AND SPORTS BETTING Claiming Race at Dundalk. They emerged with the one two, as Approach The City (12/1) got the better of Liberty Star (40/1).

The Rapscallion Syndicate-owned Lord Gorgeous justified his position as the 11/8 market-leader in the Irish EBF Stallion Auction Series Maiden at Dundalk.

Nicholls puts best seasonal tally on the board

Paul Nicholls beat his best ever tally of winners for a single season as Threeunderthrufive gave him his 172nd victory of the campaign at Perth on Wednesday.