Smullen at double with Don Camillo 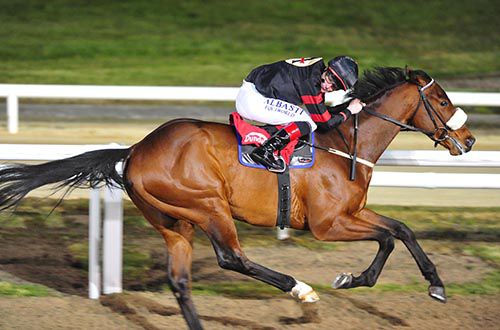 Don Camillo secured a pillar-to-post victory in the extended mile and two maiden at Dundalk.

The 4/7 favourite was there to be shot at by the two Ger Lyons-trained horses - Azzuri and Master Of Mayhem, who were both making their debuts.

They both came off the bridle at the two pole and couldn't reel in the frontrunner who scored by three and a half lengths from Master Of Mayhem (9/4). Azzuri was half a length further back in third.

"It was straightforward. Obviously with the favourite coming out it made it easier," said Pat Smullen.

"He handles that surface well and I couldn't see him wanting soft ground.

"I don't know what the opposition was like but he did it nicely. He's a horse that I think will progress."

Dermot Weld's winner had run once before when taking fourth in a mile maiden at this venue in December.

John Oxx's Pour Deux was ruled out due to being lame. This left four to go to post.

Pat Smullen bookended the card by winning the first race on No Fear and the last on Don Camillo.

Dundalk Stadium presented Chris Hayes with an award tonight for being the leading jockey at the track's winter series.

Go Another One keeps delivering for McConnell

Go Another One (9/4) warmed to his task off the front as he retained the three-mile hurdle in Cork.

Sweet Sixteen added to a win at Tramore back in April when taking the Kanturk Handicap Hurdle in good style at Cork.

Powell gets a tune out of Cliara

Cliara gave jockey Jamie Powell his second victory when staying on best in the apprentice handicap at Naas.