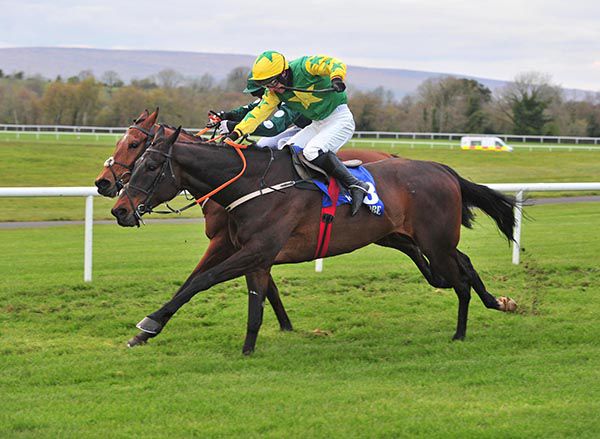 The son of Yeats today battled well for jockey Noel McParlan for a length and a half success from 5/2jf Fameaftertheglory.

Afterwards Gibney revealed “his owner, Tom O’Connor, bought him himself last September online and I gave him serious abuse over it!

“He’s a big 16.3hh coming out of Venetia Williams’ and you expect something to be wrong with them - they are the type of horses people like Venetia are trying to buy normally.”

The Irish Grand National winner added “I wouldn’t be too well up on my bumper form but we’re just delighted to get the result. He’s a huge horse and this is not where I’d have planned to come with him.

“However with the balloting and everything the way it is, you go where you’re getting in these days. I just wanted to run him because he was ready to run.

“My wife actually did a fantastic job fixing him up — he had a couple of problems. He’s a lovely horse and we’re delighted to have. He looks the part.”

High Definition is one of 11 colts declared for the Al Basti Equiworld Dubai Dante Stakes at York on Thursday.