Moore returns to action with a winner 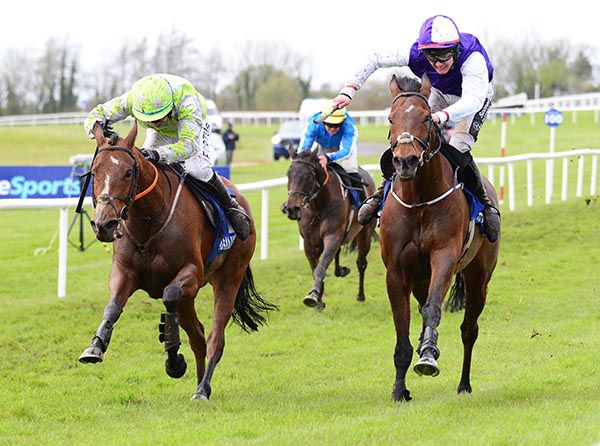 Jonathan Moore returned from a dispiriting spell on the sidelines today at Ballinrobe with Gavin Cromwell's stable jockey bagging a winner on his third ride back, on the trainer's Different Beat in the Michael Cawe Suspended Ceilings Handicap Hurdle,.

Moore's Naas fall from Ujumpthelastuwin on March 14, and resulting rib injuries, robbed him of Cheltenham Festival rides the following week, thereby missing Cromwell's pair of winners Flooring Porter in the Stayers Hurdle and Vanillier, in the Albert Bartlett Novices Hurdle.

Moore returned to action today and on his third ride back, steered Different Beat to a last-gasp neck win over Shantou Warrior.

Cromwell's assistant Feidhlim Cunningham later commented “it’s good to have him back rocking and rolling.

“That’s the mare’s second run for us and the trip was too sharp the last time. We thought that was an issue again today but in these 80-95s you have to run where you’re getting in.

“Johnny (Moore) said they went fairly hard and it played into her hands. She stuck at it well, he got her rolling and hopefully she can pick up another little one somewhere.”