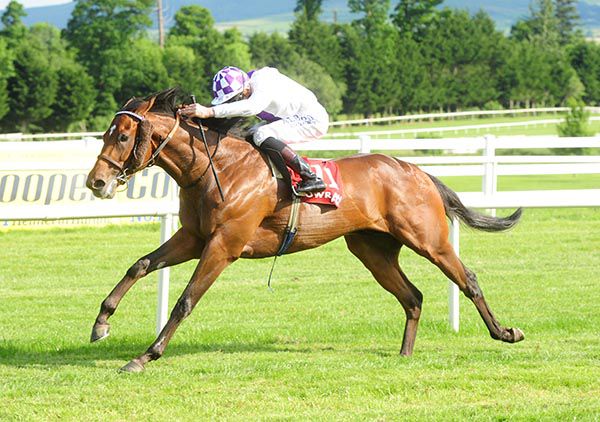 Jim Bolger and Kevin Manning completed a Gowran double in the finale on Bank Holiday Monday with Meagher's Flag in the Mallwood Ltd. Handicap.

Their previous winner was Change of Velocity for Godolphin, but that fellow is actually Bolger-bred, as is Meagher's Flag, who is in the ownership of J acki e Bolger.

A well-backed 4/1 market-leader (from 11/2 on track and bigger earlier) Meagher's Flag made all for an ultimately comfortable victory over Azzuri. Three lengths split them at the line.

"He's named after the first man (Thomas Francis Meagher) to raise the Irish flag in Waterford (in 1848). I was hoping he was going to be a bit better but maybe next year he will be," said Jim Bolger.

"He should stay a bit further and may run again later this week (entered at Leopardstown on Thursday)."

Euchen Glen could be in action again in the MansionBet Rose of Lancaster Stakes at Haydock on Saturday.

The Pat Martin-trained Indiana Rose swooped from last to first to claim the spoils in the Naas Business Club Handicap this afternoon.

Hattie Amarin gave jockey Niamh Fahey her first success over flights when winning the first division of the mares' handicap hurdle in Cork.