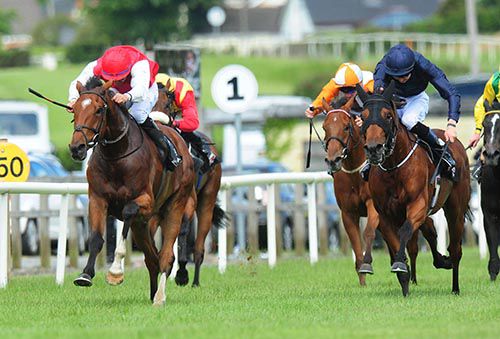 Botany Bay shed his maiden tag in style as he took the Magners Ulster Derby under Niall McCullagh for Charles O'Brien and his mother Jacqueline.

The son of Galileo was well-beaten on his two starts last year but put in improved efforts this term, finishing fourth and third respectively.

Making his debut in handicap company today he opened on-course at 12/1 before being backed into 7's at the off.

Settled in mid-division he was ridden in fourth from three furlongs out. He came with his challenge between horses at the furlong pole and hit the front over 100 yards from home, keeping on well to score by a length under Niall McCullagh.

Fields Of Athenry was sent off the well-backed 7/4 favourite (from 9/4 on-course) and he finished second under Joseph O'Brien for his father Aidan.

Prominent throughout the market leader looked the most likely winner turning into the straight but he drifted towards the stands in the closing stages and had no answer once headed by the winner.

Brightly Shining completed the placings a further half a length back in third under Rory Cleary for Jim Bolger at 16/1.

Charles O'Brien said afterwards: "I wasn't sure that the pace was going to suit him. They went very slow early and I was hoping for a better gallop.

"I've always had great faith in this horse but he let me down quite badly on his couple of runs as a two-year-old, I was scratching my head a little bit. Anyway he has grown up and matured and obviously he is different horse this year.

"This is the first time I've won the race. I wasn't sure he was streetwise enough but it panned out well.

"We bred him and we have a yearling brother. He'll make into a real nice stayer. "I was looking at the Queen's Vase last night and wondering did I do the right thing but I did.

J.acqueline O'Brien added: "I'm thrilled. We called him Botany Bay as it is an Australian place where all the emigrants come in and I'm Australian. So he had a lovely name to begin with.

STEWARDS REPORTS The Stewards received a report from Mr. P.L. Malone , Turf Club Clerk of the Scales, regarding the fact that S. Foley , rider of Azzuri (GB) , weighed in at 1.7 lbs overweight. Evidence was heard from the rider concerned, who stated that he drank some water at the start and this must account for the overweight on weighing-in. Having considered the evidence, the Stewards were satisfied that S. Foley was in breach of Rule 231 and they therefore suspended him for one race day. The Turf Club Veterinary Officer examined Tuk Tuk (GB), trained by D. K. Weld, at the request of the Stewards and reported the animal to be clinically abnormal post race. R.P. Cleary, rider of Brightly Shining, trained by J. S. Bolger, reported to the Stewards' Secretaries that his saddle slipped coming out of stalls.

Sweet Sixteen added to a win at Tramore back in April when taking the Kanturk Handicap Hurdle in good style at Cork.

Powell gets a tune out of Cliara

Cliara gave jockey Jamie Powell his second victory when staying on best in the apprentice handicap at Naas.

Euchen Glen could be in action again in the MansionBet Rose of Lancaster Stakes at Haydock on Saturday.