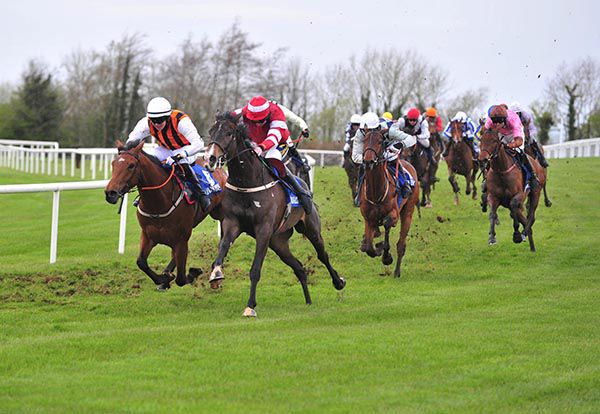 Jamie Codd joined Patrick Mullins at the head of the Amateur Jockeys' Championship (43-43) today at Ballinrobe as he maintained a 100% record for buyer/seller owner Steven Crawford on newcomer Bronn, in the DPD Depot 33 Ballinrobe INH Bumper. The Amateur Jockeys' Championship includes winners ridden in races under Flat Rules of which Codd has ridden 1 winner and Mullins 3 during the season.

Codd, twice Champion Point-to-Point Jockey, won his only Amateur Championship in 2016/17 beating Mullins by one winner, and today steered Bronn, bumped badly by runner-up Howyabud rounding the home turn, to a 2.25L win.

Neither Larne-based owner Steven Crawford nor his brother winning trainer Stuart were present and afterwards Codd revealed “Steven only calls me maybe twice a year and they usually win!”

Codd, who missed out on two winners, Galvin and Mount Ida, at last month's professionals-only Cheltenham festival, added “he’s a gorgeous looking horse and Steven loved him all along — he’s been telling me about him for a while.

“As you can see from him walking around there he’s a lovely horse.

“Fingers crossed now he’ll be okay tomorrow and get sold."

Codd's three rides for retired jockey Steven Crawford, an ex-Ballydoyle rider, have now all won, the first being in 2017, then 2020 and today.