McManus doubles up after one two in the Porterstown 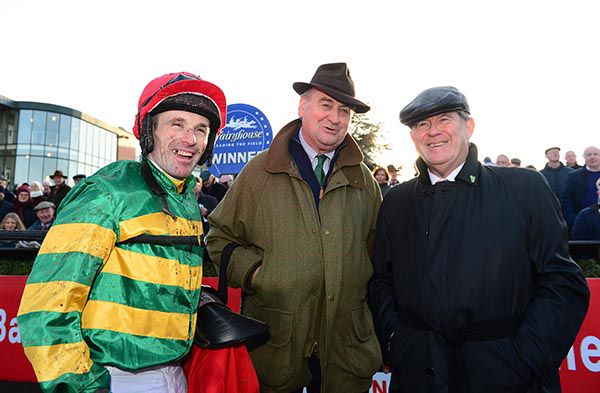 Noel Meade’s Killer Miller hadn’t won a race since 2015 but he had only run six times since.

That patience was rewarded as the Sean Flanagan ridden ten-year-old produced a whirlwind finish at the end of this three mile five furlong marathon.

That enabled him to upstage another McManus hope, Mon Lino (not fluent at the last), with Ah Littleluck in third.

The margins between them were a length and three parts and half a length.

Three fences in the back straight were omitted due to low-lying sun. That meant they jumped sixteen instead of their scheduled twenty two.

McManus won the previous race, the Drinmore, with the Joseph O'Brien-trained and Mark Walsh-ridden Fakir D'Oudairies.

“He’s had plenty of problems and hasn’t run that many times even though he’s been around for a long time. We couldn’t get him right all last season and I thought when he went back to Martinstown that we might not see him again because he looked terrible," said Meade.

“They found that he had an infection and he came back looking a million at the end of the summer. I said to Sean to take your time and give him a chance to get home.

“The three fences taken out in the back straight probably helped as he wasn’t winging them. It gave him a chance to get into the race without too much hassle.

“Today he was bouncing around beforehand and he hasn’t been like that for a long time. He stays really well and Sean said he could go five miles.

“I suppose he’ll be back her for the National and we’ll look at all the long distances chases. He’s in the Paddy Power but that could be a bit short for him and he could go for the National Trial at Punchestown.”

Owing to the low trajectory of the Sun, the Stewards granted permission for fences 6, 7 and 8 to be omitted from this race.

Rachael Blackmore, rider of Aherlow trained by Henry de Bromhead, reported to the Clerk of Scales that her mount made a mistake, never travelled thereafter and was pulled up.

P.T. Enright, rider of Wrong Direction, trained by Seamus Spillane, reported to the Stewards' Secretaries that his mount didn't get the trip.

The Irish Horseracing Regulatory Board Veterinary Officer examined Wrong Direction, trained by Seamus Spillane, at the request of the Stewards and reported the animal to be post race normal.

The Stewards interviewed P.T. Enright, rider, in relation to his riding of Wrong Direction, who appeared tired when making a mistake at the last fence and was subsequently pulled up.

Evidence was heard from the rider concerned, who stated that his mount felt capable of jumping the last while racing in fifth place, but emptied quickly and made a mistake.

He stated that he quickly pulled up thereafter and added that if his mount had tired further out he would have pulled up before the last.

Having considered the evidence, the Stewards noted the explanation offered and reminded P.T. Enright of his future responsibilities in this regard. 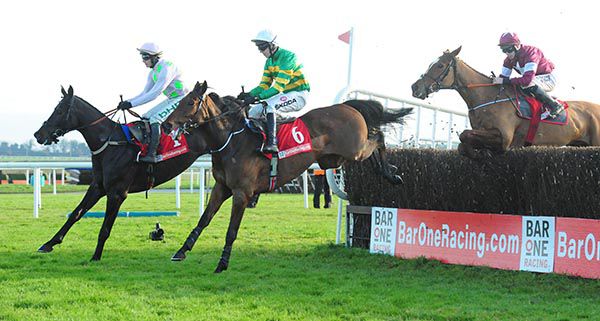 Dazzling jumping display from Fakir to make it 2 for O'Brien

Fakir D’Oudairies put up a spectacular display of jumping to win the Grade 1 BARONERACING.COM Drinmore Novice Chase at Fairyhouse to bring up a double for Joseph O’Brien.